Welcome to the website of James Hewison, author of exciting books for children and young adults.

Strong characters, great plots, and satisfying endings, they are all here. Explore the site, read great short stories and get the latest news about what James is working on right now. Leave a comment, buy a great book, or do none of those things. But do enjoy yourself while you’re here, because that’s the one and only rule.

James’s books have a 5-star average review score on goodreads. So, check ’em out. You won’t be disappointed. 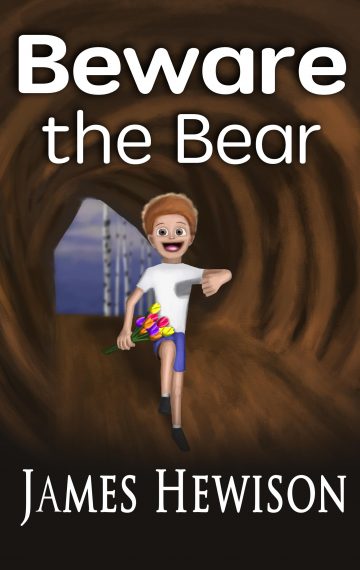 A good time and a romping rhyme for ages six to ninety-nine. A charming illustrated rhyming story Nick was in the mood to take a different path home. To see new things and be free to roam. He didn't fully grasp what his Gran was trying to say. Beware the bear, she warned. But he was on his way. He bounded through the trees and he paddled by the lake. It wasn't till the tunnel that he made a big mistake. He stomped and sang and echoed. It was tons of fun. But…

An exciting illustrated novel for ages 7-11. A great story. Nine-year-old Lucas is captain of the football team and he’s not afraid of anything …except the monster under his bed!! When…

A captivating story of magic and mischief for ages 9 and up.    Lose yourself in an exciting adventure novel. Follow 12-year-old Zelie as she battles the evil that lurks a decade after Jack chopped down the beanstalk... Jack…

James Hewison is an author of fiction for children and young adults. He was born in Darwin, on the north coast of Australia, and spent his childhood swimming in crocodile inhabited waters, and accumulating scars in other death-defying activities.

When he wasn’t on an adventure of his own, he loved reading and writing about people who were. He developed a fascination for the vast array of reactions people exhibit towards threats in different forms. The way some people will pay any price for their passions. The way some wilfully approach unthinkable danger while others flee. The reactions and interactions between differently driven characters and the relationships and tensions that form. And how exciting it is to read a story of a relatable character who will take a path that you, the reader, might never contemplate. These were the stories James wanted to create.

He was also interested in health and the power of knowledge so, for a while, he put aside fiction while he finished a degree in pharmacy and another in business.

A few years on, James and his wife had two delightful children. Soon, the priority for fiction began to rise again as his children began to enjoy stories at bedtime. James began to conjure tales for them, like a cauldron which bubbled and burped in new ways every night. He stirred in adventure, added a pinch of silliness, and a splash of drama so that by the time the children’s heads hit their pillows, they were filled with giggles and the magic of possibility and wonder.

When James’s daughter was eight years old, she asked him to write her a story. James sat down with an idea for a twist on the classic fairy tale, Jack and the Beanstalk. He thought five pages ought to be enough, but ideas wouldn’t stop popping into his head. When the overgrown beanstalk of plot lines was whittled down to its most compact and entertaining form, the resulting story emerged in the form of James’s first novel, Behind the Twisted Fence. His second novel, Shadow Creepers, came the following year, setting up a pattern that would set James’s mind to writing and publishing at least one great book per year.

If you like page-turning stories with strong characters and satisfying endings, find out what James is working on right now. You can also check out his Author page on Amazon.